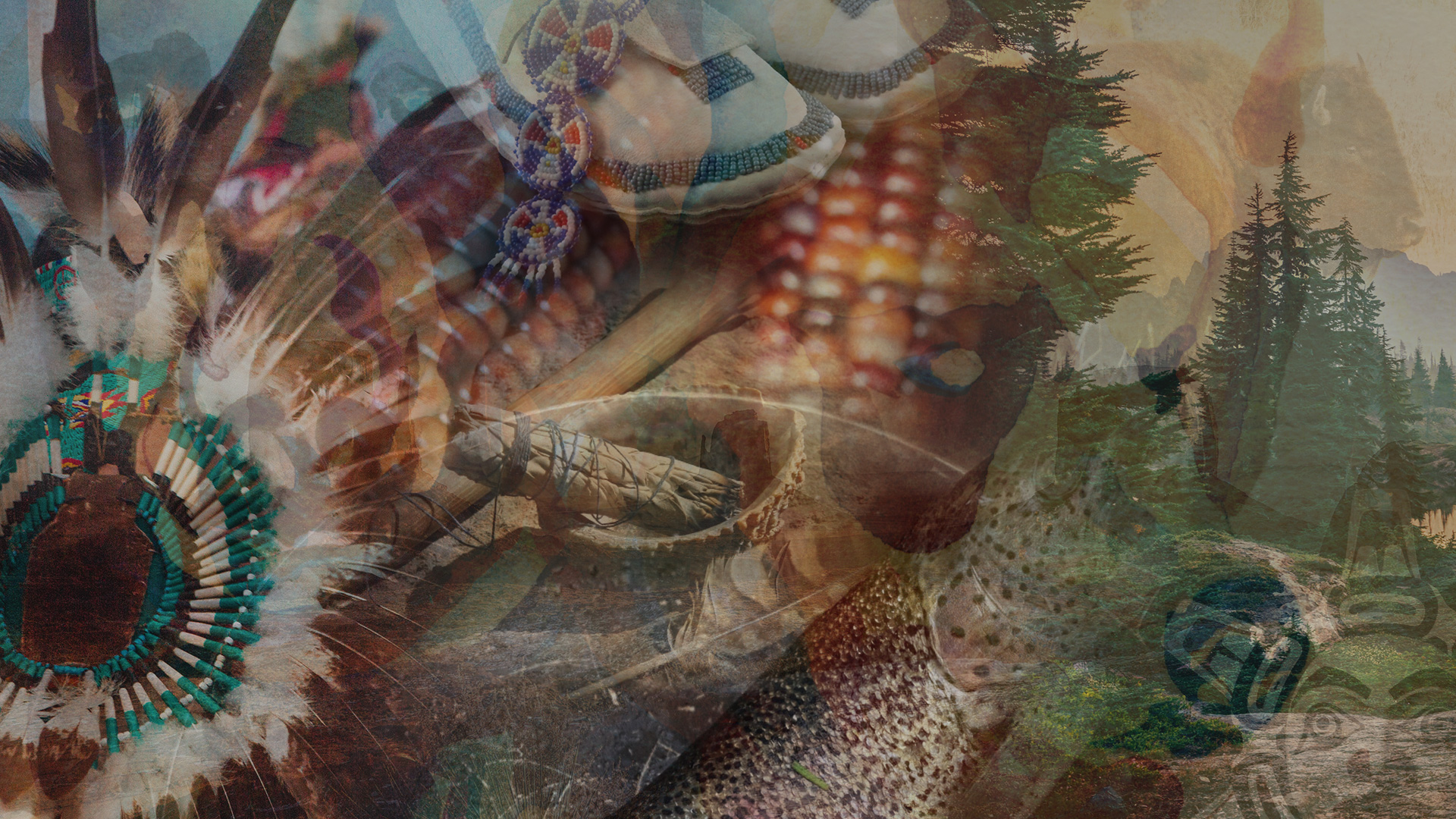 Andrea Rutstein (Oglala Lakota) was just 15 years old when she was diagnosed with rhabdomyosarcoma (RMS), a rare cancer that forms in skeletal muscle tissue. At the time she knew there were too many goals she still needed to accomplish, so much more she wanted to do.

A high school sophomore and student-athlete, Andrea was competitive by nature and refused to let this disease beat her.

“This is going to be tough and I’m not going to feel like doing it, but I must,” she remembered.

In 1997 Andrea had just wrapped up the high school volleyball season. It was the day after her last game when she began to feel a sharp pain in her abdomen. She brushed it off at first, thinking it was another typical sports injury like a pulled muscle. But when the pain became so intense that she was unable to stand, her parents rushed her to the family physician. A team of doctors ran some tests and discovered a large mass in Andrea’s abdomen. Because it had been attached to her reproductive organs, she was taken to an OBGYN for emergency surgery.

Andrea was diagnosed with RMS shortly after the procedure. This rare disease targets soft tissue and can arise anywhere in the body, but is most likely to start in the head and neck area, urinary system or the reproductive system – which was the case for Andrea. RMS is more common among children but can occur at any age. Andrea said the first major symptom she experienced was the abdominal pain. However, thinking back to the time of her diagnosis, she said she often felt tired and weak and had also become pale.

Her family was her biggest support system and “the ones that got me through.” Because they lived in rural South Dakota, Andrea and her family had to travel to a larger city hour away for the treatments she needed. The commute became expensive very quickly, as they had to drive to Minnesota for every other round of chemotherapy. Andrea went through treatments for a year, and what she appreciated most during this time was that her cancer care team didn’t sugar-coat anything. They trusted her to handle her health information and didn’t treat her like a helpless, sick kid. “They still had expectations of me and didn’t allow me to ever give up,” she explained.

Her parents didn’t let the illness coax their attitudes of Andrea’s capabilities either. They never tried to inhibit their daughter from enjoying the activities she loved. It was so important for Andrea to continue living as a normal teenager, and she “never once felt limited by them.” And while some friends remained by her side and treated her the same, others didn’t know how to handle the situation. Andrea says even though her life was very different after the diagnosis, her friends helped her stay true to herself. “I was still the same girl,” she continued, “I just happened to be living with cancer.”

Though facing cancer so young was devastating, Andrea now realizes the significance of her experience. She said the “amazing” part about her journey was learning more about herself and her loved ones; she and her family grew stronger and closer than ever. Still, it was difficult for Andrea to watch how the sickness impacted her relatives, especially her parents. Now that she has children of her own, she said she “can’t imagine the horror they must’ve felt.”

In 2019 Andrea is celebrating 22 years of being cancer-free. The registered nurse takes action against cancer in American Indian and Alaska Native communities by participating in walks and telethons, helping to raise money for organizations that fight chronic illnesses. She also enjoys volunteering as a patient navigator to assist others on their journeys because she understands their experiences first-hand. Knowing the struggle of living in a rural area, Andrea encourages all Native people to seek the healthcare they need when they feel like something is wrong, “especially if you are considered at risk.”

“Make your health a priority and stick to it,” she says.

Thank you Andrea for sharing your story.

In 2012, Richard Boswell (Oneida Nation) was referred to a urologist after he started to experience sudden, frequent urination and erectile dysfunction. At the time Richard believed these problems would go away on their own, so he ignored the doctor’s recommendation

In 2012, Richard Boswell (Oneida Nation) was referred to a urologist after he started to experience sudden, frequent urination and erectile dysfunction. At the time Richard believed these problems would go away on their own, so he ignored the doctor’s recommendation to see a specialist and continued life as normal. Looking back, Richard wishes he hadn’t overlooked these symptoms and had been more in tune with his health, especially since his father had a history with prostate cancer.

“When doctors suggest you go see a specialist, go see them,” Richard advised. “Always do what you can, when you can, and early on.”

Fast forward to October 2014 when Richard was out with a friend, and again, had to make too many trips to the restroom. This time he knew something was wrong and immediately visited his primary care doctor, who discovered his prostate was enlarged and referred him to a urologist. The urologist told Richard his MRI results were abnormal and advised he follow-up with a biopsy; a couple weeks after his examination, doctors confirmed Richard had stage 4 prostate cancer.

According to the American Cancer Society (ACS), other than skin cancer, prostate cancer is the most common cancer among men. The disease is often slow-growing, and can come with symptoms like having irregularity or difficulty urinating, as well as erectile dysfunction if the cancer is in its more advanced stages. It’s important for men to talk to their healthcare providers about the risks of prostate cancer, and to always ask if screening is right for them.

Richard’s mother and caregiver Kathy Boswell (Oneida Nation) was anxious when she received the news of her son’s diagnosis. She knew he had been experiencing frequent urination for some time, but “couldn’t believe it because he was so young.” Richard was just 44 years old – 12 years younger than his father was when he was diagnosed with stage 2 prostate cancer. And even though she knew her son’s illness was more serious than her husband’s had been, Kathy was hopeful her son would beat it.

While prostate cancer doesn’t usually develop quickly, Richard’s “had a Gleason score 9” at the time of his diagnosis. This meant the cancer was at a stage where it would likely grow and spread more rapidly. Richard jumped into treatment one month after his diagnosis to prevent the cancer from growing any larger. His radiation had caused a good amount of weight gain, and made his hair thin and brittle. But apart from the side effects, Richard remembered, “I was basically living a normal life.” Even on his worst days, he believed in himself to power through.

“People think just because they have cancer, there’s no hope left,” he added.

The following summer, Richard’s care team had planned on removing his prostate. But when the time came for surgery they discovered the cancer had spread beyond the organs, and would now require a more complex treatment strategy. Doctors explained that because Richard’s body would never be rid of the cancer, the only course of action would be to stop or slow its growth. A port was put in his arm so he could begin chemotherapy; the care team switched his treatment to pills shortly after because they were more effective.

From late 2015 to March 2017, Richard continued to live a regular life. But during this time his bladder had also begun to develop a tumor. His doctors didn’t radiate it, fearing it would have caused severe damage to the area. Richard underwent intensive surgery on his urinary and digestive tracts, and since July 2017 has been living with both colostomy and urostomy bags. After the surgery, his care team tried again to radiate his bladder, and found that his cancer had spread to his vertebrae, which resulted in more radiation.

This was when Kathy started to get more involved. Having worked as a medical assistant for nearly 20 years, she understood what needed to be done while caring for Richard. She knew how to take his temperature properly, who to call for assistance, and how to follow up with his appointments. The days Richard had treatment could be taxing, and sometimes the best way Kathy could help was to “just be there for my son, and be present with him.” It was just the two of them now since her husband had passed from heart failure in 2016.

Kathy remembered how mentally drained she was at this point of her caregiving journey. “It was a scary time. The cancer had gotten so bad,” she continued, “every time something good happened, I would get news that something bad happened.” She stayed by her son as he tried to overcome one obstacle after another. And though Kathy had always remained hopeful that he’d get through it, the cancer continued to get the best of Richard.

By the end of 2017 the treatment had made Richard so ill, he lost about 60 pounds. Being “so weak and sick,” with one issue after another, Richard started to believe hospice care was a possibility. In January 2018 his doctors met with him and Kathy to discuss his options.

“Those were the darkest days,” Kathy said.

It wasn’t long before Richard’s care team introduced him to a new drug called Keytruda, an immunotherapy that helps the immune system fight cancer. This treatment helped immensely, and by the summer he started putting on weight and regaining lost energy. After the third treatment of Keytruda, Richard’s cancer had become undetectable and his health “really improved from where it once was.” Given his cancer type, it is unlikely he will ever be cancer-free or in remission.

Before his diagnosis, Richard always thought about the ‘what ifs,” replaying moments of his life from 20 years prior. But his journey taught him to “just not worry about things.” He wished he knew the importance of being in the present, and enjoying every day, even if it wasn’t his best.

Kathy is astounded by the improvements in Richard’s health, and excited he is well enough to spend time with her now that she’s retired. “We enjoy life, me and him.” They travel, attend community events and powwows, and continue to do the things they love together. They also remember “to take it easy when we need to,” Kathy said. And though being a caregiver was never easy, Kathy would do it all over again for her son.

“That’s what you do when you’re family,” she explained.

Richard is grateful for his mother’s support along his journey. He is also thankful for his niece’s four beautiful kids, and credits them for his motivation to get through his experience with cancer. “I’d love to see them grow up and be there for them. I’d like to be around to see what happens,” he said. Richard believes the longer he can keep the cancer from overcoming him, the more life he’ll be able to experience with the ones he loves.

“Enjoy the good times,” he encouraged. “Cancer is a very nasty disease, but that doesn’t mean you have you put your head down and keep it down.”

Thank you Richard Boswell & Kathy Boswell for sharing your story. 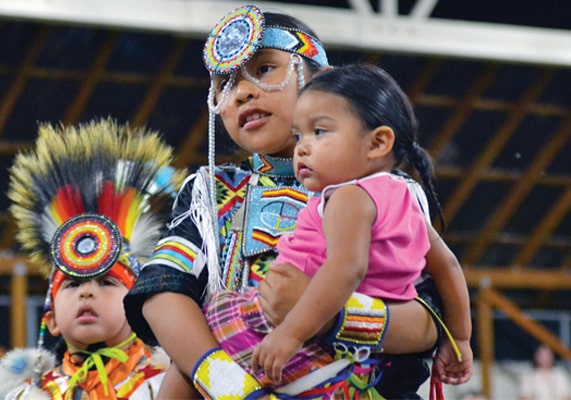 A gift to the American Indian Cancer Foundation helps us strengthen our programs, build larger campaigns, and provide more resources to families across Indian Country. While grants and contracts fund specific projects, it’s generous donors like you that play a vital role in making this work happen!